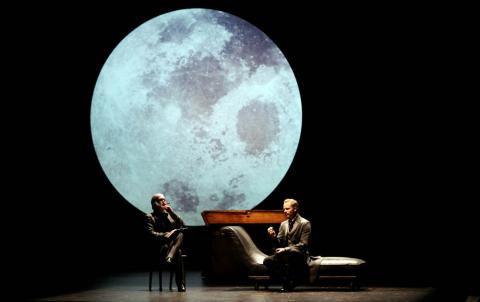 ****
The score is intricate and dark, with moments of both brutality and lyricism, not to mention flashes of acerbic wit. Shakespeare’s theme of the tension between mercy and justice fascinated the composer. It is hard to imagine who else could have set this opera with such lack of pathos and so refined a sense of ambivalence.

[Tchaikovsky’s opera is] polytonal, existing in a world somewhere between Britten and Berg.

William Shakespeare’s The Merchant of Venice is a play about love and money, mercy and law. The play was turned into an opera by André Tchaikowsky (1935–1982), a Polish-born composer who emigrated to Great Britain. He wrote the opera in 1970s and 80s, but it has never been performed. The world premiere of The Merchant of Venice took place in July 2013 within the Bregenzer Festpiele.

Set in Venice during the Renaissance, the drama centres on Bassanio, a young nobleman who would like to court the beautiful Portia but doesn‘t have the money to travel to her country estate, so he asks the merchant Antonio for help. Antonio‘s wealth is tied up in maritime trade but he offers to procure the sum Bassanio needs from the Jewish money lender Shylock. Shylock hates Antonio for being so contemptuous in his treatment of Jews, and therefore stipulates that if the debt is not repaid within three months, the penalty will be a pound of Antonio‘s own flesh...

The premiere was accompanied by a three-day symposium about the composer. The participants included scholars studying Tchaikovsky’s oeuvre, his friends and former associates: John O’Brien, Andras Schiff, Christopher Seaman, and Uri Segal.

The composer worked on it from 1968 until his death in 1982. Based on the play by Shakespeare, the libretto was written by John O’Brien (who attended the premiere).

André Tchaikowsky’s greatest success was as a world-famous pianist. Endowed with an extraordinary memory, he could learn to play a new piece overnight. His greatest passion, however, was composition.

Apart from The Merchant of Venice, the Bregenzer Festspiele 2013 celebrated other works by Czajkowski, including The Inventions Op. 2, Seven Sonnets of Shakespeare, String Quartet No. 2, and Piano Concerto Op. 4 featuring soloist Maciej Grzybowski, an expert on and enthusiast and populariser of the great composer.